cancel confirm NSFW Votes: (0 votes)
Are you the publisher? Claim or contact us about this channel.
0
Showing article 3868 of 11431 in channel 3312089
Channel Details:
People Here Also Viewed:
Loading ....
Viewing all articles
Browse latest Browse all 11431
0
0
For every wrestling gimmick like the nWo or Goldust that are both original and entertaining, there are awful gimmicks that are so awful or offensive it's truly shocking that they were approved by a team of writers. Some are just poorly done, but sometimes a gimmick will be created that is so blatantly racist, you'd swear your creepy uncle that's not allowed at your house during holidays came up with it. Here are ten of the most racist wrestling gimmicks of all time. 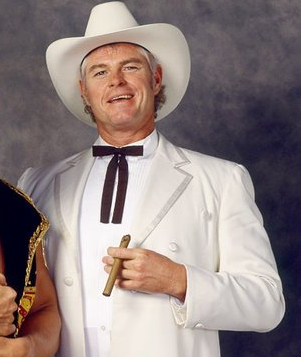 Colonel Parker was a well-known WCW manager in the '90s and worked with some of the biggest names in the sport including Steve Austin, Terry Funk, Vader, Jeff Jarrett, and Sid Vicious. His persona was that of a deep south take on Elvis' manager, Colonel Tom Parker. It's not incredibly original, but wrestling is known for taking "inspiration" from pop culture. The problem was when someone at WCW thought it would be a good idea to put Colonel Parker as the manager of Harlem Heat. These guys: 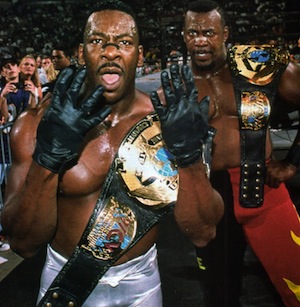 How does no one look at a storyline involving a guy that looks like a plantation owner leading two African-American men to the ring? There's a rumor that a scrapped storyline involved Colonel Parker "purchasing" Harlem Heat and leading them to the ring in chains. That's right, modern day slavery. Great angle, guys.

2. Roddy Piper Does A Promo In Blackface
In 1990, Piper was feuding with Bad News Brown, which led to a rivalry match at WrestleMania VI. For some reason the WWF decided to make the focus of the rivalry race, which resulted in some of the most racist segments you've ever seen. The worst of them had to be the one where Roddy Piper painted half of his face black and proceeded to do a horribly racist impression of Bad News Brown while rambling something about sharecroppers and black power.


3. Virgil
I know the 80s were a simpler time, but how did no one mind a storyline about a rich white guy with a poor black servant? The Million Dollar Man Ted Dibiase would continually humiliate Virgil by making him do the most menial tasks. Even the name Virgil was a joke as Vince McMahon chose it as a shot at Dusty Rhodes, whose real name is Virgil and was a big rival to McMahon at the time. Here's a look at Virgil in....uh action?


4. The Junk Yard Dog
There weren't many African-American wrestlers at the time, or any time for that matter. When a massive superstar emerged, he was given the name the Junkyard Dog and came out with a chain around his neck. Out of all the choices, why would you take one of your few black athletes and put him in chains? Here's a video of him from 1987 crawling around on the ground, wrapped in chains, talking to a dog about how much he likes ham hock bones.


5. DX Does Blackface
A lot of these gimmicks and ideas you may look at and brush off as being in a different time period (sure?) but this one took place in 1998, so there's not much excuse. DX had been feuding with the Nation of Domination, which was basically all the black wrestlers in the WWF thrown together into one group, when DX decided to "parody" the Nation. You can hear Jerry Lawler roaring with laughter through the whole thing as Triple H, X-Pac, and the New Age Outlaws pranced around in blackface. To make it even worse, the WWF didn't hide this monstrosity. They continue to feature it on DVDs and specials. It's unbelievable that no one noticed how racist it was.


6. Tatanka
"Oh he's Native American? I have the perfect gimmick for him!" As soon as Tatanka's music started, everyone associated with Native American culture had to just cringe. He wore feathers, did war cries, painted his face, and carried a hatchet. It was basically a caricature of what a 5th grader thought a Native American should look like.


7. Roddy Piper and Tony Atlas
Oh look it's Roddy Piper again. During one of Piper's recurring segments called Piper's Pit, he brought on guest Tony Atlas, who happened to be Africian-American. Piper then asks Atlas about eating soul food while leads to a conversation about fried chicken and chitterlings. If that's not enough, Piper, who is accompanied by a man in a leather vest and cowboy hat, always a great rival for a black guy, end the segment by yelling out a watermelon joke. It's actually shocking how racist this entire segment turned out.


8. Kamala
What better way to portray people from Uganda than to make an African American wrestler into a craze savage? Kamala would eat live animals and grunt and scream like an animal. Not only did he have a manager, Harvey Whippleman, but he also had a handler to attempt to control him. As a kid I didn't realize it, but looking back now it was insanely offensive. Here's a video of him from 1992 in full form making white kids in the crowd openly weep.


9. Muhammad Hassan
Oh boy. In a post-9/11 world you'd think the gimmick of having a terroristic-like storyline in wrestling would be an obvious thing to avoid. Not in the WWE. After the Undertaker had won a match, Hussan came out and started praying. This was after protests by Muslims to get him to stop thanking Allah in his interviews and after matches. After he finished praying, five figures disguising their identity ran out and attacked The Undertaker. If that wasn't bad enough, it took place the day after a terror attack in London where a bomb had been set off by terrorists. Hassan was soon released from the company and the storyline was wisely put to rest. Here's the full segment:


10. Cryme Tyme
I don't know whose idea Cryme Tyme was, but it seriously feels like a comedy sketch showing how a racist, old white guy would perceive black men. Everything from the video quality to the cringe-worthy voiceover on the segment is absolutely unreal. The only way it would make sense is if it ended with a credit that said written by Donald Sterling.